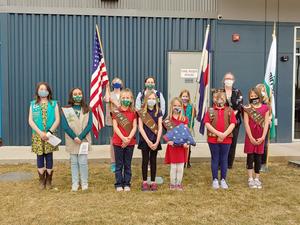 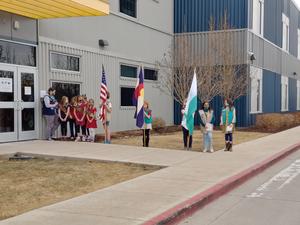 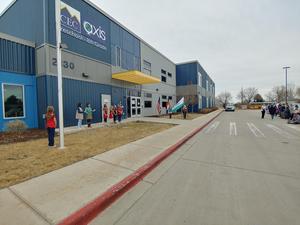 Pictures of the Flag Retiring Ceremony, presented by Girl Scout Troop #72886.
Local Girl scout troop 72886 heard that the AXIS/CEC flag was going to be replaced and jumped at the opportunity to officially retire the flag.  A girl scout color guard stood at attention while scouts lowered and folded the flag.  The two masters of ceremony read a script that explained why they were retiring the flag and what the steps of the process represented.  The troop will hold the second half of the ceremony, which will include a ceremonial burning and burial of the flag, during their summer camping trip.  Scouts who participated in the ceremony: Andrea Ortiz, Emma Hamel, Dinah McDaniel, Callie Sutherland, Adi Story, Kaydence Clark, Harley Carroll, Adelyn Aldrich and Eloise Grim. Click here to view a video of the ceremony!